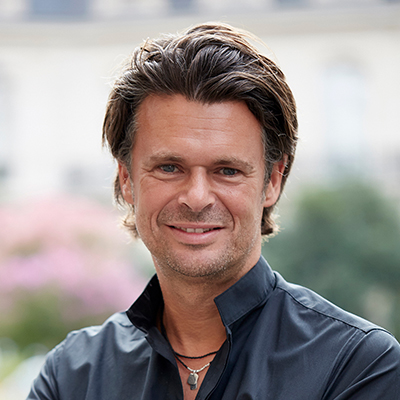 Alfred is the co-founder and co-scaler of Red River West, created in partnership with the Artémis Group. Red River West is a Franco-American venture capital platform dedicated to the French tech sector. It aims to support about ten start-ups, to accelerate their business development in the United States and to help them advance from their position as local to global leaders.

Before Red River West, Alfred founded three companies with an aggregate value of more than 250 million dollars. These included Purch, one of the 50 leading Internet groups in the world, a global leader in digital publishing and content about technology, which boasts over 100 million readers per month.

In 2010, Alfred was diagnosed with a rare liver disease: primary sclerosing cholangitis (PSC). At the time, he was told he had a median life expectancy of 15 years. Taking matters into his own hands, in 2011, he co-founded a foundation dedicated to this disease, the Fonds CSP (PSC Fund) Thanks to his efforts, for the past seven years, the Fonds CSP has been funding a dedicated research team at Saint-Antoine Hospital. At the same time, Alfred radically changed his lifestyle and moved to sunny Los Angeles to continue developing his company in the United States.

Since 2011, in a rare turn of events, Alfred’s disease has stopped progressing even as he himself has remained active. Convinced that there is great potential in research on the microbiota and that our lifestyle choices play a significant role in our health, he decided to create the Microbiome Foundation together with his partners in order to continue to increase the positive impact of his efforts.